The Red Point Birman cat is a mystical and magical creature with enchanting and soulful sapphire eyes. They are extremely gentle and will be the ultimate best friend you will ever have. A Birman is notable for their looks; many owners are attracted to them because of their unusual coloring.

Birmans come in various color points, but they are generally white. As they mature, they develop their color points. The color points of a Birman are as diverse as the rainbow itself. They can come in a seal, blue, lilac, chocolate, red cream, and tortie. All these colors can either be classic solid patterns or lynx patterns. Birmans are also noted for their beautiful pristine white paws. Red point Birman cat is especially attractive. They would have soft colored red points standing out of their snowy bodies. If you are looking to own a Birman cat, particularly a red point Birman, you may want to know the standards for this color. Additionally, you may also want to know some other facts about the Birman.

The origin of the Birman is shrouded in myth

Like other cat breeds, the Red Point Birman cat has an interesting origin story. According to legend, this cat came from holy temples that belong to priests in ancient Burma, currently Myanmar. When raiders attacked the temple and the priests, the loyal cats stood by their dying master and kept him company. Because of this cat’s dedication, a magical transformation happened. The cats are transformed into a golden hue, and its eyes became a dark deep blue sapphire. Its appearance became similar to the Goddess being worshiped by the priests.

No one knows the exact origins of the Birman

No one quite knows where the Red Point Birman cat came from in reality when it first set foot in Europe. There are speculations that the cats were once holy companions to temple priests in Southeast Asia. In some anecdotes, the Birman was taken from Asia to France.

Historians believe that in 1919 a couple of Birman cats were transported from Asia to France by two Englishmen. They helped defend the temple against an invasion. Some claim that a wealthy railroad tycoon purchased a couple of Birman cats, smuggling them out from a temple and sent them to France. However, one thing is certain; this breed of cat was first recognized and exhibited in France in the 1920s.

The Birman was nearly extinct it, but it made a comeback

According to the CFA, the Birman was nearly extinct during World War II. They say that at some point, there was only one breeding pair of Birmans left in the entire world. In order to make this cat more unique breeders had to outcross it with other breeds specifically the Persian. The fluffiness of the cat prevailed, and it later became a popular breed across Europe.

Red Point Birman cat didn’t reach the shores of America until the late 1950s. Cat lovers embraced this new breed, and in 1967 it was officially recognized by the CFA. Just a few years back in 2014, this silken haired kitty was ranked as America’s 15th most beloved cat.

The Birman is notable for its coat and eyes

A medium build distinguishes the Birman, and it has a rounded face and distinct Roman nose. But it is most notable for its long single-layer coat, which is soft to the touch and is susceptible to matting. The fur’s tip is typically a light shade of beige, and the cat’s dark color points can come in various colors, including lilac, chocolate, blue, and seal. Similar to Siamese cats, Red Point Birman cat are all white and have distinct colored coats as they get older.

Along with its colored points, the Red Point Birman cat is also notable for its white gloves. However, the crowning glory of a Birman cat is its blue eyes.

Birmans and Himalayans have similar looks

The Birman inspired a fashion legacy

Top fashion designer Karl Lagerfeld owns a Birman. This beloved cat is pampered and travels the world with the distinguished designer. This pet travels in high style in a private jet with two personal assistants for its every whim. Karl Lagerfeld’s Birman inspired him to design an entire collection of cat-themed accessories, which include bags, shoes, leather goods, and shirts. This cat is a star in its own right. It made millions of dollars after starring in a couple of high-profile advertisements, including the Japanese cosmetics brand Shu Uemura.

Birmans have some odd OCD behaviors

You might think that as a human, you are the only one who is susceptible to OCD. Birmans also tend towards repetitive behavior such as sucking, chewing, and even swallowing items that aren’t food. This trait is known to be common among Siamese and Red Point Birman cat cats. This behavior has been extensively studied by scientists, which is even published in the Journal of Veterinary Medicine. It isn’t established why these cats do it, but they did notice that this behavior increases among Birmans who were weaned early and come from a small litter size.

The red tabby point Red Point Birman cat should have a creamy body that shades gently to a white expanse on the stomach and chest. A pale body coat is ideal; preferably it should have zero to a few body markings. But some will have ghost stripes which tone down to a point is acceptable. The points should be deep red on a light apricot background. The back of the hind legs should have solid markings that are deep red. The color of detail, with the exception of the ring areas should also be deep red.

When it comes to the nose, the Red Point Birman cat should have a solid color leathery nose to match the tone of the point colors.

The Red Point Birman cat is a solid point color class of Birman. The standard calls for a creamy white body shading to white on the stomach and chest area. There should be notable points of red except for the gloves. The nose should be leathery and bright pink in color.

Birman, is medium-sized to large size, and they have an average weight of 6 to 12 pounds. Like other cats that have color points Birmans are generally solid white and develop their distinctive color patterns as they get older and mature. These colors and patterns can be a seal, gray, blue-gray, white, cream, brown, reddish-brown, and even tortoiseshell. The patterns allowed are either solid or lynx. Every Birman share one top feature, which is their solid white paws. The naturally striking lace gloves should complement the Birman’s striking blue eyes.

Birmans will usually have a silky medium-length coat. They will have a fluffy tail in the same or a similar color to the rest of the pattern. A regal ruff on the neck makes them royal-like and majestic.

Personality Traits of the birman cat

People who are looking for a generally quiet, calm, and a loving cat would have to consider the friendly Birman. The breed isn’t as outgoing as typical cats, but they are deeply devoted to their families, including humans and other animals. They have energy levels on the average range, making them great for pet parents who want a pet to play with and curl up with. Birmans often settle down for a lazy afternoon nap.

Birmans are also a great choice for families with children since they are easy-going and patient, making them a good match for young children who are loud and sometimes lack restraint in petting, which can help them upset and skittish. Birman also love to snoop around and are playful, so having your kids around will help them get entertained and energized.

Appearance of the birman cat

Birmans are stocky and are notable for their silky longhair. They have coats that are light in color and because of their fur’s texture, it doesn’t allow for matting. Grooming is not required in their daily routine. The Birman has pointed dark areas on their face, legs, and tail and are distinct due to their paws’ pure whiteness. They have rounded sapphire eyes that give them a sweet look.

Taking Care of Your red point birman cat at Home

A lot of what you do at home to keep your Birman happy and healthy is common sense. Just like with people, make sure to watch their nutrition allow them to get plenty of activity. Groom them by regularly brushing their hair. Please pay attention to their teeth and coat and immediately call the pet emergency hospital when something unusual happens to them.

Make sure that you follow a daily schedule of examinations and vaccinations recommended for your pet. During the examination of your cat, they will perform crucial checkups and tests for diseases and conditions that are typical in Birmans. Another very crucial step in giving optimum care for your cat is providing them pet health insurance. Your Birman will need medical tests and procedures. These are needed throughout their lives, and the pet health insurance will help you pay for these costs.

Try to have healthy routine care for your cat for them to live longer, stay healthy, and be happy during their entire lifetime. It cannot be overemphasized enough how important it is to have a proper diet and exercise for your Birman.

Watch over your pet as you would a young child. Make sure that you secure the area where they live, such as keeping the door closed and picking up after yourself to avoid any mess that might confuse them. If it is necessary, you should also block certain rooms. Apply the necessary precautions to keep your cat out of trouble. Train them from keeping off on inappropriate surfaces. They shouldn’t jump on furniture and stay away from objects that shouldn’t be ingested.

Despite their long hair, a Birman sheds very little and will only require brushing once to a couple of times each week.

Birmans will generally have good teeth, and you can keep them in top shape by brushing them at least a couple of times a week.

Check the ears weekly for wax buildup, debris, or any infection sign and clean it when necessary.

A Birman needs daily exercise and play sessions that will stimulate their biological instinct to hunt and explore. Keep your cat mentally and physically active, so they do not develop behavioral issues.

Cats are finicky and extremely clean, and they demand a clean litter box. Make sure to provide a litter box for every cat in your home and scoop the waste regularly.

It is crucial that your cat drinks adequately. If they refuse to drink from their bowl, try giving them ice cubes or utilize a flowing fountain. Give them a high-quality cat diet that is well matched for their age. It is crucial to exercise your cat regularly and give them high activity toys.

Birmans are an amazing breed, and if you have one, it will certainly stand out. Birmans are not only amazing to look at, but they also make great companions. They are loving, quiet, gentle, and easily get along with their human owners. If you want to show your Red Point Birman cat, it is important to know the Birman color standards to make sure that your pet fulfills the requirements. 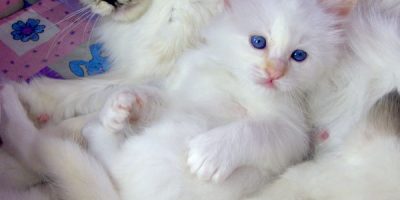